Skip to content
Previous
NMN–A Stable, Reliable NAD+ Activator and Anti-Aging Molecule and The Science Behind

NMN–A Stable, Reliable NAD+ Activator and Anti-Aging Molecule and The Science Behind

WHO International Classification of Diseases, and for the first time added ageing

In numerous studies, supplementation with NMN has increased NAD+ biosynthesis, suppressed age-related adipose tissue inflammation, enhanced insulin secretion and insulin action, improved mitochondrial function, improved neuronal function in the brain, and more. It is rapidly absorbed and converted to NAD+. Here, we look at the science behind that, its stability, possible pharmacokinetics, transport, function, and ability to induce biosynthesis of NAD+. that may be an effective nutraceutical anti-ageing intervention, with beneficial effects on a wide array of physiological functions.

In June of 2018, the World Health Organization (WHO) released the 11th edition of its International Classification of Diseases, and for the first time added ageing. The classification of ageing as a disease paves the way for new research into novel therapeutics to delay or reverse age-related illnesses such as cancer, cardiovascular and metabolic disease, and neurodegeneration.2,3 Nutrient sensing systems have been an intense focus of the investigation, including mTOR (the mammalian target of rapamycin) for regulating protein synthesis and cell growth; AMPK (activated protein kinase) for sensing low energy states; and sirtuins, a family of seven proteins critical to DNA expression and ageing, which can only function in conjunction with NAD+ (nicotinamide adenine dinucleotide), a coenzyme present in all living cells.

Across the kingdom of life, an increase in intracellular levels of NAD+ triggers shifts that enhance survival, including boosting energy production and upregulating cellular repair. In fact, the slow, ineluctable process of ageing has been described as a “cascade of robustness breakdown triggered by a decrease in systemic NAD+ biosynthesis and the resultant functional defects in susceptible organs and tissues.” Ageing is marked by epigenetic shifts, genomic instability, altered nutrient sensing ability, telomere attrition, mitochondrial dysfunction, cellular senescence, stem cell exhaustion, and dysregulated intercellular communication.

By middle age, our NAD+ levels have plummeted to half that of our youth. Numerous studies have demonstrated that boosting NAD+ levels increases insulin sensitivity, reverses mitochondrial dysfunction, and extends lifespan. NAD+ levels can be increased by activating enzymes that stimulate the synthesis of NAD+, by inhibiting an enzyme (CD38) that degrades NAD+, and by supplementing with NAD precursors, including nicotinamide riboside(NR) and nicotinamide mononucleotide. A conceptual framework called NAD World, formulated over the last decade by developmental biologist Shin-ichiro Imai, MD, PhD, of Washington University School of Medicine, posits NMN as a critical, systemic signalling molecule that maintains biological robustness of the communication network supporting NAD+. 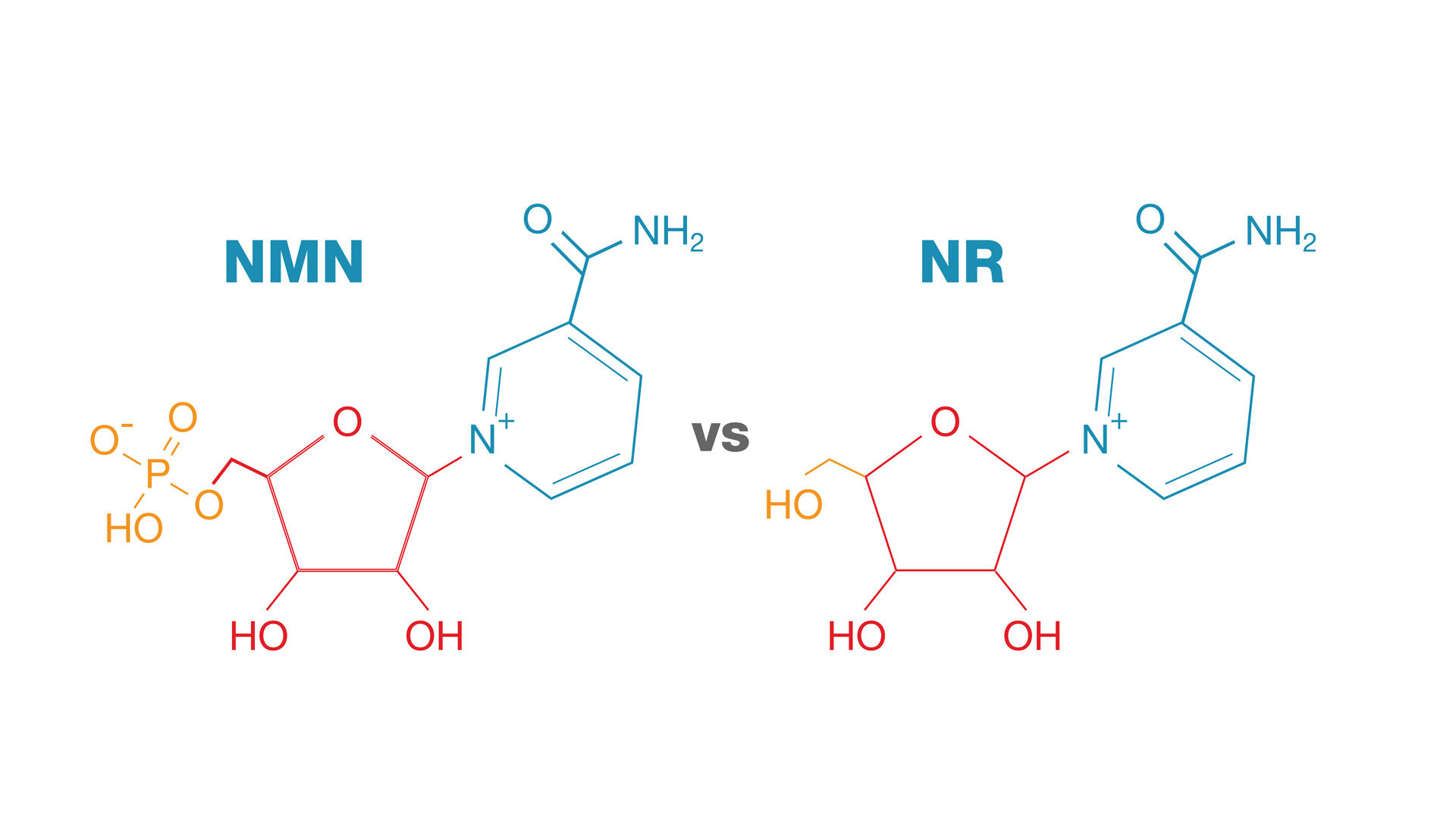 Pathways to NMN in the Human Body
A veritable symphony of interlocking transformations allows NAD+ to be both synthesized and regulated in the body. It is well known that vitamin B3 is a building block for Nicotinamide adenine dinucleotide (NAD+). It is also widely recognized that NMN is a potent precursor for NAD+. Though NMN is naturally found in small amounts in fruits and vegetables such as avocados, broccoli, cabbage, edamame, and cucumbers17, most NMN is synthesized from vitamin B3 in mammals form of nicotinamide. At the centre is nicotinamide phosphoribosyltransferase (NAMPT), an essential rate-limiting enzyme that catalyzes the conversion from nicotinamide to NMN, which exists in both an intracellular (iNAMPT) and extracellular form (eNAMPT). The extracellular form has higher enzymatic activity than the intracellular form and has been found in blood plasma, seminal plasma and cerebrospinal fluid in humans. In addition, eNAMPT appears to be produced by a wide array of cell types—including fat (adipocytes), liver (hepatocytes), white blood cells (leukocytes and monocytes), and heart and brain cells (cardiomyocytes and glia cells). Like NAD+ and NMN, eNAMPT declines with age. Both white and brown adipocytes actively secrete eNAMPT, suggesting that fatty tissue may be a modulator of NAD+ biosynthesis.6 Adipose tissue actively secretes extracellular vesicles (EVs) that are enriched with NMN and can circulate through the plasma. EVs are membrane-derived particles surrounded by a phospholipid bilayer that is released by cells in the human body. These EVs not only protect their cargo, but they can also deposit their payload where needed.
NMN and NR dance together. NMN can be converted by the body to NR, which then enters cells, and is converted back to NMN by an enzyme called nicotinamide riboside kinase (NRK). More recently, an “elusive’ transporter was discovered, which can transport NMN directly into cells. It is transported across cell membranes directly into the cell’s cytoplasm by an enzyme called Slc12a8. Uptake pathways of NMN vary with tissue types, and interestingly, Slc12a8 expression is about 100-fold times higher in the small intestine of mice than in the brain or adipose tissue. Researchers speculate that the gut microbiome, and certain resident bacteria within it, may produce NMN.
NMN levels fall with age, and ageing itself has also been shown to significantly compromise the body’s conversion of NMN to NAD+.

Abundant Evidence for Anti-aging and Health-Enhancing Effects of NMN
NMN has demonstrated a wide array of remarkable effects in numerous mouse models of disease and ageing, benefitting conditions ranging from diabetes to Alzheimer’s disease to ischemia. Orally administered NMN is quickly synthesized into NAD+ in tissues in mice. It has been able to suppress age-associated weight gain, enhance energy metabolism and physical activity, improve insulin sensitivity, improve eye function, improve mitochondrial metabolism and prevent age-linked changes in gene expression. In mice bred to be diabetic or obese, NMN improved both the action and secretion of insulin. NMN also protected the mouse heart from ischemia and/or reperfusion injury. It has restored skeletal muscle in aged mice, and slowed cognitive decline in a mouse model of Alzheimer’s disease, by improving the survival of neurons, improving energy metabolism, and reducing reactive oxygen species. It may help maintain the integrity of the blood-brain barrier. NMN is likely a good candidate to suppress inflammation—the increase in inflammation associated with ageing—since studies show it lowers adipose tissue inflammation associated with age. In fact, older mice appear to be more responsive to NMN, in comparison with young mice.

NMN appears to be stable in water; in one study 93%–99% of NMN was maintained intact in drinking water at room temperature for 7–10 days. NMN also appears to be rapidly absorbed. When given to mice by oral gavage, there was a steep increase of plasma NMN in a mere two and a half minutes, with further increases at 5-10 minutes. Plasma levels then declined to baseline, suggesting rapid absorption in the gut. Long-term (1-year) NMN given orally, in doses of up to 300 mg/kg, was found to be safe and well-tolerated in normal mice.

Looking Forward: NMN and Human Health
NMN is clearly a murine fountain of youth. But what about humans? Shin-ichiro Imai has said that NMN may improve adult human metabolism, rendering it more like that of someone ten or twenty years younger. His team is now studying NMN in humans. David Sinclair, Harvard University’s noted anti-ageing researcher, whose research on resveratrol, NAD+ and sirtuins is world-renowned, is also conducting human trials. He is taking NMN himself; he has said his lipid profile has improved dramatically and he feels more energetic and that his blood markers, at nearly 60 years old, are closer to those of a 31-year-old.

An interesting question is the delivery system for oral NMN: the EVs that transport the molecule through plasma in the body are liposomes. A liposomal version of NMN may well mimic the body’s own transport system, enhancing uptake and delivery, as science advances its understanding of the holy grail of reversing ageing.